Last night was a big night for Winfield.  He slept the entire night in his big boy bed.  We are so proud of him!  At about 11:00pm Jared and I snuck in there with our point and shoot.  Jared aimed it in the general direction of his bed, turned on the flash and bam! we have this picture. 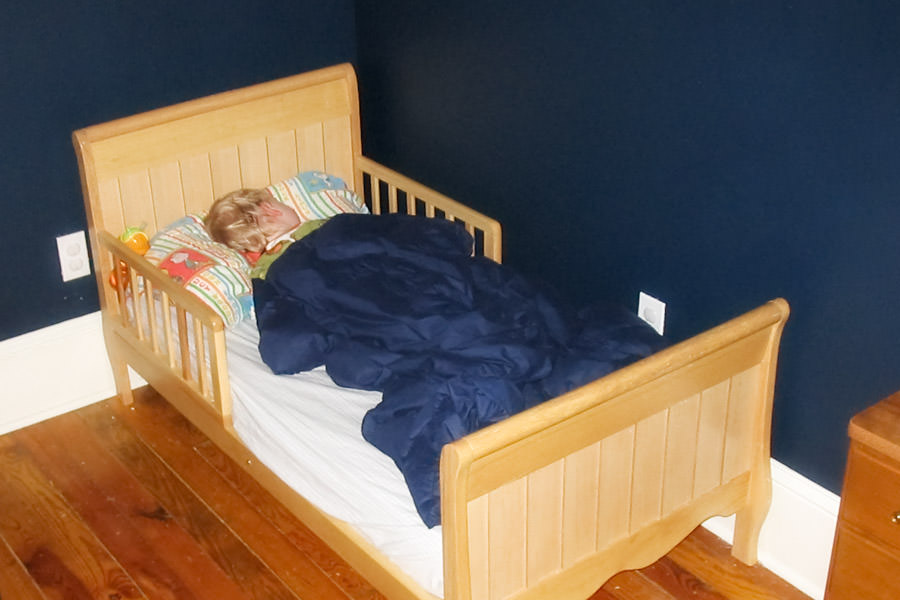 If you want all of the details keep reading, otherwise you've got the idea. About a month ago we moved his toddler bed (thank you Jamesgang) into his room so that he could get used to it.  He really liked having it in his room but we kept putting him in his crib for a while.  Win is very tall for his age.  Jared and I had noticed that the top of the crib rail was landing just above his belly button.  Basically, he could get out if he was willing to take the fall.  We thought that it was about time to move him.  Jared disabled the 2 outlets that are near his bed so that they are totally dead. round 1: Two days ago Win begged me to let him sleep in his big boy bed for his nap.  He kept saying, "try it? try it?"  We 'tried it.'  I put him down for his nap and talked with him about how he wasn't allowed to get out.  He was really quiet for about 5 minutes.  Then all of the sudden he jumped out of his bed, ran into the living room and shouted, "Play me!"  I think that he thought that sleeping in a  big boy bed also meant that he got to pick how long his nap was.  We talked about it and I put him down in his crib. round 2: The next day he wanted to"try it?" again.  I put him in the bed for his nap and we talked about how he isn't allowed to get out of the bed.  I listened to him for about 10 minutes as he played and rolled around.  Then I heard the distinct sound of pages turning.  He had found a book that was wedged between his bed and the wall.  I went in there to retrieve the book (he would never fall asleep if he had a book with him.)  He wasn't too happy about that. I then listened to him for another 15 minutes or so as he banged and rolled around; but I never heard the sound of  him walking so I let him be.  After 15 minutes of this I went in there to check on him.  I found him straddling the foot of the bed and reaching over to the dresser that in is the lower right hand corner of the picture.  He had opened the drawer and removed about 10 pair of socks.  Socks make great substitute toys when in a pinch.  I admired his ingenuity in finding something to play with without touching the floor.  I didn't punish him because I could see what he was thinking.  He was obeying the technical command not to get out of the bed.  He saw a way to obey and have socks.  When I was a kid I really had a hard time with the whole spirit of the law/letter of the law thing.  He so so similar to his mother.  We talked about it.  Now that he knows better he's responsible to obey.  He did however get moved to his crib. round 3:  Last night he wanted to try his new bed for night time.  This seemed a little more hopeful than a nap.  His nights have always been better than his naps and it was dark so he couldn't see the entertaining letters on his pillow.  He zonked out quickly and slept the entire night there.  In the morning we heard him wake up.  Jared and I went to get him before he hopped out himself.

wow, that is a big step for a little guy. great job and good luck! :)

What a big boy--How fast he is growing!

i know. doesn't it kind of make you sad? what happened to my baby boy?

hilarious!!! He's such a good boy! Remind me how old he is again? Just wondering how far off we are.

he'll be two in a fortnight, betsy.