This year, after much peer pressure from my friends, I caved in and joined a fantasy football league. Last night we drafted, and I thought you all might be a captive audience with which to share my sweet team. It was a auction-style draft where you spend 100 fake dollars bidding on all the players to fill your roster. Alright, here goes.First of all, my team name and logo can't be beat: Bad Newz Kennelz. In poor taste? Probably. And for those of you that know her, check out the strange resemblence between that poodle and my niece Eden. 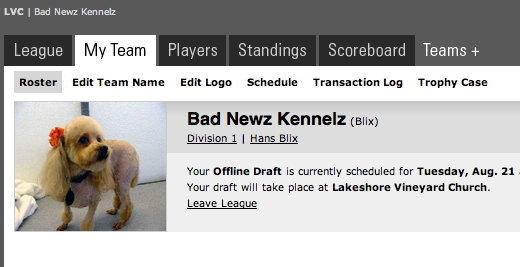 My draft choices:1. Shaun Alexander, runningback, Seattle, $26. First guy I drafted, spent a decent amount on him (not as much as my friend Dave who blew $51 on LT), but I felt like I was getting a good value for a top-ten back. In my 15 minutes of pre-draft research, everyone said getting good runningbacks was by far the most important thing. Besides, I like Mike Holmgren.2. Cedric Benson, runningback, Chicago, $16. I can't believe I drafted a Bear. But, everyone was overspending, it seemed, and this seemed like a good value for a feature back on a team that emphasizes the run game and has the worst quarterback in the history of the universe.3. Marvin Harrison, wide receiver, Indianapolis, $22. This might have been a little bet of a stretch moneywise, but c'mon, its Marvin Harrison. I knew I wanted to have at least one Colt, and Joseph Addai and Peyton Manning had already been purchased for massive amounts.4. Baltimore Ravens Defense, $8. I think this was a solid value.5. Jon Kitna, quarterback, Detroit, $9. I was pretty pleased with this pickup. Having never entertained hopes of paying enough to draft Peyton, I was secretly hoping to pick up either Marc Bulger or Jon Kitna. My head said Bulger but my heart said Kitna. I predict Kitna and the Lions offense will put up some gaudy numbers this year.6. Jamal Lewis, runningback, Baltimore, $2. In case Cedric Benson or Shaun Alexander aren't getting it done.7. Jeremy Shockey, tight end, New York Giants, $5. This dude has sweet hair. And, I confess, I am secretly fascinated with the Giants and the tribulations of Peyton's kid brother Eli.8. Andre Johnson, wide receiver, Houston, $4. Did I actually draft someone who plays for the Texans? Flame on. Truth be told, I've never even heard of this dude, but he was the highest ranked wide-out left at the time.9. J. P. Losman, quarterback, Buffalo, $1. Backup for Jon Kitna, as if I'd need one. I think he has a mustache sometimes.10. Joey Galloway, wide receiver, Miami, $1. My third wideout. Never really heard of him either.*** at this point in the draft I thought I'd quietly pick up Michael Turner from San Diego for a song, but Dave woke up from his Charger daydream and bid more than I could afford. Dang. I figured if LT was accidentally clubbed in the knee by Tonya Harding I would be golden. Then, I tried a similar move to pick up Adrian Peterson, and was outbid again.11. Shayne Graham, kicker, Cincinnati, $1. Best kicker left at this point.12. Brian Griese, quarterback, Chicago, $0.25. I think I did this just so I could say I told you so to my friend Josh when the Bears bench Rexxy after two weeks and 134 fumbled snaps. Plus, I have fond memories of watching Griese win the 1998 Rose Bowl in the flesh (thanks Dad). Go Blue!13. I know I drafted somebody else, but I forgot who it was.All in all, I feel like it was a strong showing. What do you think? Do I have a chance?

Jordan is a little hurt that you couldn't pick up a single Panther... ;)

oops...that is from me. i didn't notice that laura was logged in...

Sarah - I would have loved to have drafted Steve Smith (he is a stud), but unfortunately Carolina has no quarterback to throw to him.

ouch. that hurts. even if it's true.

Sweet. I'm not sure you're allowed to draft players you've never heard of, though. Where's the scouting report?

BTW, Andre Johnson is a stud, he just plays for a crappy team.