One of Those Days

Today was a kind of tough one for our short friend. To borrow a euphemism from cousin Chloe, Win had 'yukkies in his belly' all day. Rather than give you all the gory details, I'll put it this way: Win went through four changes of crib sheets, four sets of baby clothes, had three baths, and completely annihilated every article of clothing I was wearing at one point. Have you ever seen that one scene in the movie 'Aliens' where the android gets impaled by the alien tentacle? That's a pretty good approximation of what it was like. Oddly enough, considering the violence with which he was expelling the contents of his gastro-intestinal tract from various orifices throughout the day, he was quite pleasant in between episodes. Cuddly even. It would have been downright enjoyable snuggling with him if we didn't have to deal with the gnawing fear that he might erupt like a geyser at any moment. Anyway, he's doing fine now, sleeping well so far tonight. Here's a shot of Win and his barf bowl (no, it never actually worked) for your viewing enjoyment. 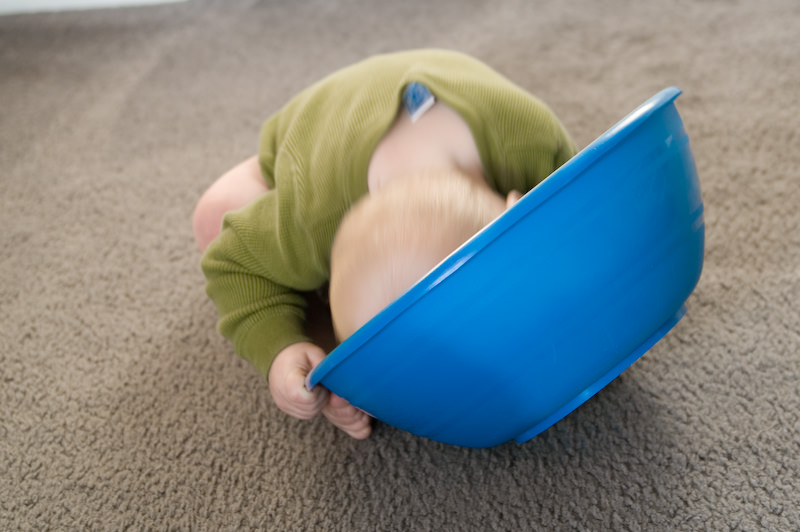 Awwwwh! I feel bad for you both. That's an exhausting day for a mother and son. Hope he's better today and no one else gets sick too.

I don't see what the problem is..he's got the bowl in the right spot...how could he miss?? :) he he... We are definitely familiar with those kinds of days. I hope it's all cleared up now and he's back to his usual self.

Poor Win! Poor Jared & Rachel! It is no fun when they are so sick so little... Hope he is all better soon!