The apple doesn't fall far either tree/And one blog disclaimer

I was a little hesitant to post this.  So I guess I'm adding a disclaimer.  The internet has a way of allowing people and families to filter out the rough stuff.  To appear perfect.  Bragging-Christmas-letter style.  I'm torn.  On one hand I don't want to be apart of something that isn't honest, something that makes life seem like something that it's not.  But on the other hand I can't bring myself to publish things about my kids that aren't their best side.  At this point they are little kids, I don't want them to be defined by the struggles and immaturity that accompanies being 3 years old.  So I find myself not posting things.  I stop myself from bragging because I don't want to present some obnoxious Leave It To Beaver life.  As I was writing this post I made a list of several things that Win is bad at.  But why?  So here is my decision, this blog is a celebration of Henderson high points.  It's not a cross section.  I will be editing, filtering and censoring before I post.  So please, if you must compare, compare your best days and times with ours and omit difficult parts.  And please note, I remove all of my pimples and blur my wrinkles before publishing any photograph of myself. Also, there seems to be some unwritten rule that parents are allowed to claim that their children are kind, thoughtful, sweet, beautiful and energetic.  But when it comes to claiming that a kid is smart that is somehow obnoxious and taboo.  At the risk of being obnoxious.  My kid is smart.  He's really smart.  And I'm proud of him!   There I did it.  Let's celebrate :-) So here is the blog post that I was too insecure to post without a huge disclaimer. Win hasn't had the easiest couple of weeks.  He hit a rough patch emotionally.  And I've noticed that irritability tends to indicate an ear infection.  Usually we ride it out, but this one wasn't going away and it had been over 2 weeks.  Then he started running a fever, so we got him into the doc.  Yep, he has a nasty ear infection.  He's on antibiotics now, but his fever hasn't broken yet.  So, this is a little window into Win's life.  He's been moping around the house in his pajamas escaping into books--lots of books. When I became a Henderson my in-laws regaled me with stories of pre-school Jared reading stacks and stacks of books.  The stories claim that Jared was reading by age 3 and reading Tom Clancy in the 2nd grade.  Now I believe it.  I can't hardly keep enough books in the house for Win.  He read the entire Magic Treehouse (all 68 books) in less than a month.  I gave Stuart Little to Win the other morning.  He'd finished it before 11am and read nearly all of Charlotte's Web before night.  I kid you not, he is a faster reader than I am.  On average he reads about 100 pages a day.  I know that I sound like I'm bragging.  I am.  I'm really proud of him, and excited for him that he's found the joys of reading so early. As for my part of this apple, I got a lot of ear infections as a kid. 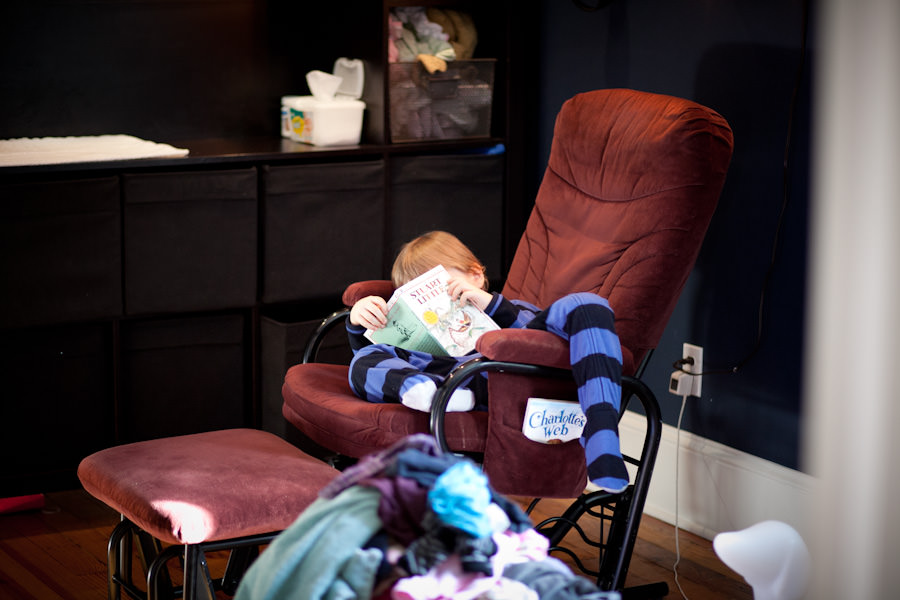 Well written Rachel. Hope Win gets better soon. Is it hard to find age appropriate reading to keep up with his reading appetite?

I think it's amazing that Win loves to read as much as he does. I also believe as a parent you have every right to want to share that. What parent wouldn't? You have beautiful kids. I can not wait to have little ones of my own :)

THat has to be one of the sweetest, cutest, purest pictures you've ever taken! As for the bragging-- bring it on. I don't think I could read stuart little or charlotte's web in one day...seriously. Sean is 2.5 and he just started sounding out words on his own and I am so proud, but feel obnoxious when I tell people about it. Our ophtholomogist told me the other day (in response to a question about if there is anything I could have done differently with sean to prevent his eye issues), "Mothers tend to take too much credit and too much blame." I didn't quite know how to take that, but decided not to tell him our 2 year old is reading. He can be a little rough. Anyway, please brag on, it is amazing stuff you need to document for your family! And the rest of us will remember that this is Hendersonville at its best.

What a lovely post and so honest. You are quite right it is so hard to say you have a bright kid. My 11 year old has just discovered reading thanks to Harry Potter and I'm delighted as their is nothing better than being able to loose yourself in a book something my 9 year old daughter says is boring ! I don't think you are bragging it's just stating a fact. Those Christmas 'round robins' as we call them in the UK are sickening because they are not honest and don't state facts, they are filled with glowing achievements and we all know parenthood isn't like that ! I'm sure you won't be one of those parents, you will I'm sure document the rough as well as the smooth and then your kids won't have such a high pedestal to fall off. They'll have a tower built with strong foundations repaired with love (a very strong glue) with windows that show a clear view of the world not a rose tinted one. Meanwhile go Win go enjoy your books, Oh and great photo x

« Yesterday we spent the day at...Growing Up »