Jared and I were 20 when we got married.  Now we're 30.  It's been a really great 10 years. I met Jared in the first couple of weeks of college.  I was a new freshman who knew nobody.  He was a new freshman who knew his roommate and a high school friend.  Looking for friends and activity I volunteered for a Youth For Christ ministry with middle school kids.  He was there.  That night I thought that he was rude.  He wrote his childhood best friend that he'd met a girl that he could marry.  Later that evening I ran into him in our dorm and changed my opinion of him. From then on I had a hard time not visiting him.  Every afternoon after classes I'd swear that I wasn't going to go down to their dorm room again.  Every afternoon I'd find myself knocking on Phelps 237.  After about a week his roommate pulled a chair from a dumpster for me to sit in when I visited.  That's when I knew that I was welcome. For the rest of the year we remained very close friends.  We made each other laugh, a lot.  We both made a lot of friends that year, most of them were the same.  It was a really fun year.  I was smitten by him and helpless in the face of it.  We were still just friends but I couldn't get over how I was feeling.  Knowing that I was going to have to do something drastic I signed up for a semester away in Mexico.  I was 18.  I really liked this guy.  My family is one that traditionally marries later in life.  At that time and that age my definition of a relationship also involved a break-up.  I never wanted to break-up with this guy.  I wanted to be friends forever.  So I left the country. Meanwhile Jared was mustering the boldness to tell me how he felt.  About a month before we were to separate he told me that I was much more than a friend to him.  Since we weren't going to see each other for nearly 7 months we decided not to date.  But we did agree that we wanted to see each other every day until then.  We saw each other every day.  Secretly, so that it wouldn't officially be "dating."  Who were we kidding? Jared went to Atlanta for the summer and I left for Mexico.  We decided not to talk on the phone, just write and email.  For 7 months I stared at the mailbox.  Email in Mexico in 1998 was a very different thing than it is today.  We wrote a string a letters and emails, mundane and passionate. When I returned to the states I visited his parents' house for a couple of days.  We talked.  A lot.  We slept and ate very little.  On one of those evenings Jared said to me.  "What do you think about getting married?"  We talked and prayed about it for several weeks.  We asked our parents for their advice and blessing.  At the end of May he officially proposed and we got married on August 14th, 1999. I am really, really lucky.  Before I met Jared I was kind of cynical about romance.  I didn't really believe in it.  I was so wrong.  Whenever I have a peek into someone else's relationship like the book A Severe Mercy, or watching Jim and Pam fall in love I think, "Someone else knows what it's like.  It's real." Jared is the most kind gentle husband ever.  He puts up with my broken parts and loves me tremendously.  The longer I'm married to him the more I realize that he loves me, and not the person that I'm pretending to be.  We are a really good team. Jared, Thanks for asking.  I do.  I will.  Til death do us part. 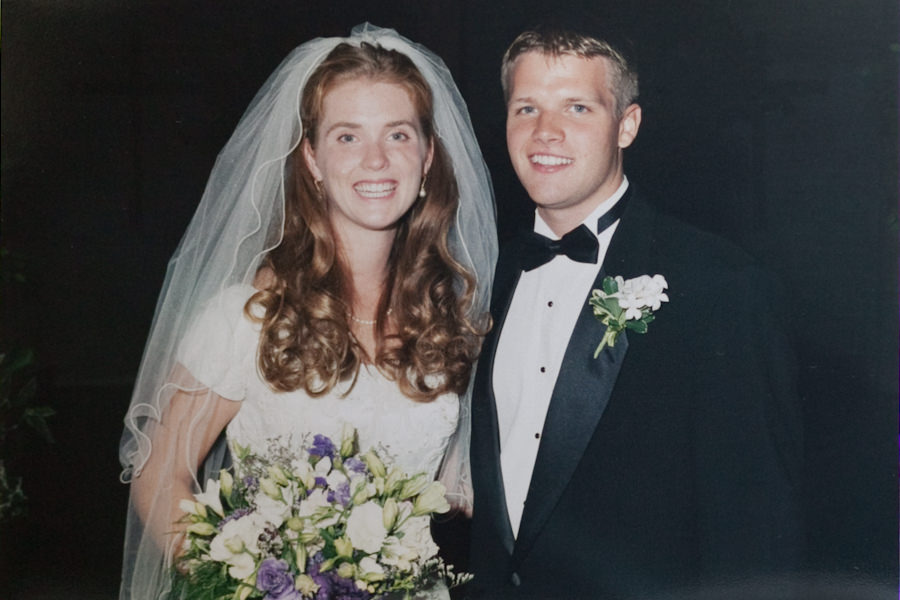 We feel so blessed that the two of you met and fell in love! Happy 10th!

what a great story. :) Happy Anniversary!

Thanks for sharing this Rach.

Awwwww! I will always remember your wedding and sweet little backyard reception. (The image of you eating corn on the cob with your veil on.) I love your family and think your marriage is awesome. I don't tell you guys enough, but I really have so much respect and awe for what you guys do. Lots of love to you!!! Bets

Congratulations Jared & Rachel! From the bottom of my heart...I have grown to love you two. You are a wonderful example of a Godly couple and Godly parents. P.S. Way to someone cry with that story...

You guys have a great story! It's funny that I witnessed part of it and was totally oblivious...OK, maybe not surprising. Happy 10th!

P.S. You are getting really old. Fortunately it looks great on you. :)

I just want to say that your little rendezvous were not all that "secret." :)